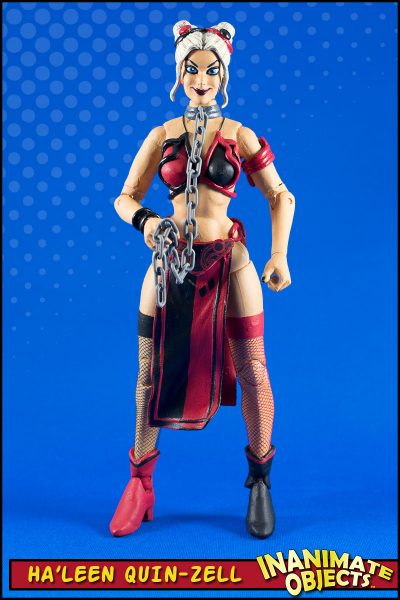 Ha’leen Quin-Zell represents Harleen Quinzell in “Gotham Wars.” And frankly, the whole thing is her fault.

Many years ago, I got it in my head to adapt Harley to the “slave Leia” look. I was inspired by some of the great fan art and cosplayers I’d seen, but I’d never come across a custom figure of her. I knew I wanted to craft this piece in either the 6″ or 7″ scale, as opposed to the smaller animated scale. (The 6″ animated scale didn’t exist yet.) My first thought was to use the Black Series “Jabba’s Prisoner” Leia as a base, but this presented two problems. First, Disney had just bought Lucasfilm, and one of their first decrees was “no more slave Leia merchandise.” So the figures that had once been plentiful at retail disappeared over night. Second, and more importantly, when I did manage to find the figure, it was horrible. Aside from being a displeasing and altogether unsexy sculpt, someone really needs to buy the folks at Hasbro a ruler. She was the size of a child, even by generous standards of measurements.  There was no way I wanted to put effort into something that wouldn’t match the scale of anything else on the shelf.

The idea continued to bounce around in my head for a couple of years. I wanted to find a base figure that was a solid sculpt, which enough articulation to accommodate the famous “reclined” pose. Ideally, the base figure would already be the appropriate skin color, so I wouldn’t have to worry about scratching paint at the joints. (That last one ruled out most if not all of the many Marvel Legends ladies.) All this time pondering also gave me time to consider how I was going to solve other unique challenges, such as the skirt and the fishnets. (I know Leia doesn’t where stockings with the costume, but some of the cosplayers I’d seen did, and I wanted to see if I could figure how to do so at this scale. Challenges, remember?)

After almost five years, the base figure made itself known. It’s Dark Horse’s Cleopatra Bettie Page figure, circa 2004. I’m sure I’d seen it when it was new, but it didn’t make my mental inventory. I can’t remember how I came across it this time. Probably eBay. Ms. page met most of my qualifications: she’s 7″-scale, great articulation, appropriate flesh color, and she already has the freakin’ skirt! No way I could pass this up! I also appreciate she was a a fairly realistic sculpt in terms of body. (Some of the more common super hero females feature questionable anatomy.) But she was not without some challenges of her own. The existing sculpted costume was minimal, but had to be Dremeled off at the neck , collarbone, chest, upper arms, and the feet. All of this was do-able.

Once all the sculpted details were removed, I got to work adding the new details. Magic Sculpt was used for the bikini top and the arm bracelets. Once I blasted away the neck, I sculpted the metal collar. The head is DC Collectibles “Super Hero” Harley.

The first big challenge was the skirt. I wanted her to be able to sit, so I spent months trying to figure out how to make a bi-color skirt from cloth, and have that silky, flowing quality. After consulting with my resident seamstress (the Violist), I opted to abandon cloth, and go for a more rigid sculpt. This decision was made easier once the Bettie Page figure came along, as her existing skirt is near-perfect already. Once I yanked off the plastic skirt, I learned it was fastened to the body via pegs and glue. I left the pegs and holes in place, but I added another hole in the center and fitted it with a magnet. Using Magic Sculpt, I shaped the “metal plate” tops of the skirt (front and back), and hid a magnet inside. This allowed for easy removal o the skirt. I sculpted a second, “sitting” skirt from Magic Sculpt, and applied the same magnet technique. Now the two sets of skirts were swappable. Finally, I knew I could never sculpt the embossed details of the plates at that scale. I also knew the exact pattern had to exist somewhere on the internet. I was right. From cosplayer patterns, I created new vector versions of the plates, and printed them to scale. These were applied via decoupage during the painting process.

The final big challenge was the fishnets. I really agonized over these, as there’s no simple way to craft these at this size from scratch. Early on I opted to use tule, the stuff used for wrapping presents with bows. Working with the Violist, I guessed at an appropriate shape, cut the tule, and she sewed up the back. It worked! Before I applied the stockings, though, I sculpted the boot tops. Once cured, I split them down the middle and popped them off. After the rest of the figure was painted, I applied the stockings. The boot tops were glued back in place, and the seams filled with epoxy. This locked the bottom of the tule in place. To lock the tops, I wrapped and glued clear vinyl around the upper edge.

The final step was gluing on the Lego chain.

From concept to execution, this one took about six years. A LOT of work went into it, and I’m pleased with the result. However, the next time these qualities present themselves, I might do a few things different.

This was not the end of the story. Somehow, this led to the full “Gotham Wars” project. Like I said, it’s her fault. 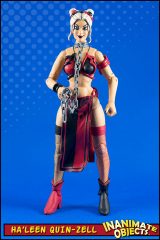 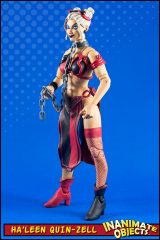 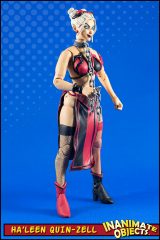 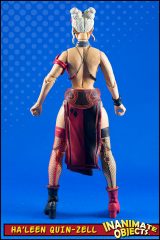 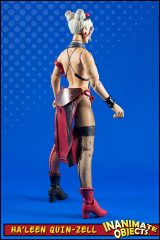 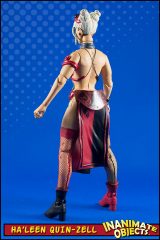 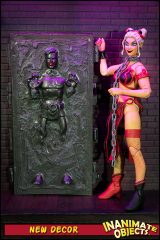 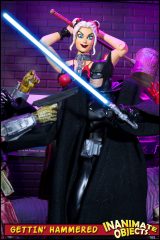 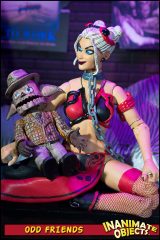 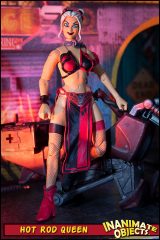 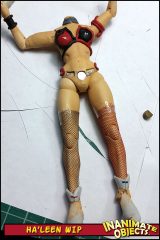 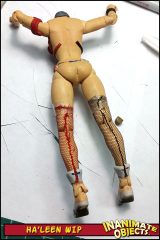