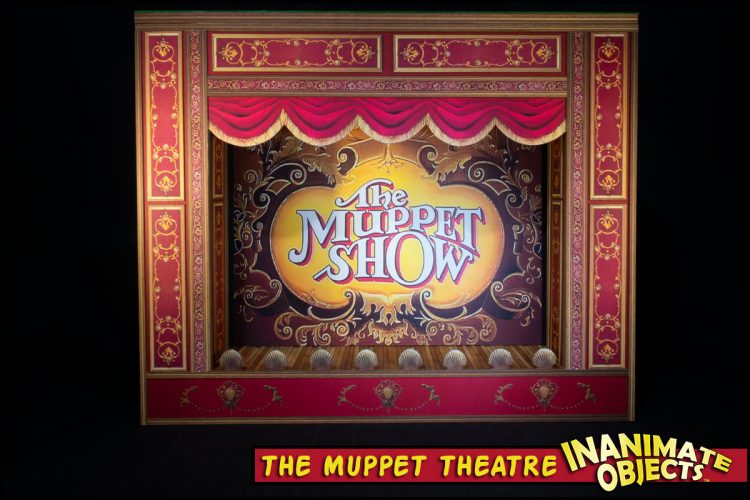 Here’s another one of those projects that was decades in the making. At least four.

Those of us who loved and collected the Palisades Muppet line of figures back in the day were disheartened that we never got a Muppet Theatre stage set before the company imploded. (Assuming such a thing could even be made.) The backstage set is great! But it’s only half the equation.

(In all honestly, it was intimidating, too. I am not without some skill and talent, but I know my strengths. Creating multiple copies of relief sculptures is not in my wheel house! As much as I wanted to build a stage set, I knew I could never come close to Lance’s work. Maybe that’s why I dragged my feet.)

Some time later, another talented artist built another Muppet Theatre stage set. Darcy E Prevost’s set was equal to Lance’s work. (Now I had two sets to be envious of!) Like me, Darcy is an alum of Henson productions. (Though my tenure was very short and a very long time ago.) So she really had a strong connection to the Muppets and their world. (Seriously, visit her site. Her work is incredible!)

Darcy then took pity on the rest of us and offered a “paper” version of the her set via a downloadable PDF on etsy. As I understand it, she took photos of her “real” set to create the art in the file. For less than $7, how could I pass up this opportunity?

Darcy’s paper set was scaled for smaller PVC Muppet figures. So I scaled it back up again. True, I lost some quality in the resolution, but for my purposes this would not be a deterrent. I resized all the art to accommodate 6″-7″ figures, and the Palisades Muppets figures (whateverthehell scale those are supposed to be). Judging by the “fire exit” door, I probably should have gone up another 33% at least, but I was already pushing the limits of practicality. Like Darcy, I printed the art and spray-mounted everything to illustration board.

The real genius of Darcy’s paper set is that it uses cut outs of the various squares and rectangles to create an illusion of depth. These are designed to be glued directly on top of their counterparts on the main pieces, giving some degree of texture to the set. So even though the many relief sculptures are depicted on flat paper, there is a semblance of grandeur and scope.

Darcy’s PDF comes with some well-written and diagrammed instructions, and I did not veer much. Given the larger size, I did have to add in some additional support structure here and there. You can see some of the “railings” I added in the WIP photos below.

I won’t go into a step-by-step here. Darcy’s file does that just fine. I do want to point out one thing to watch for. Because there’s no way to know what material you’re using or what scale you are aiming for, Darcy’s instructions don’t mention measurements, but she does warn of certain areas where extra trimming might be necessary. If you use the extra cut outs to create depth, that means you’ll have to calculate for double-thick walls in places, which is not difficult. However, somewhere in the process I made a miscalculation. By the time I connected the back wall and then the roof, the back stage right corner was not square. Also not a big deal, until you match up with the backstage playset and there’s a large gap. Oops! Mind the gap, Muppets!

Oh, and be sure to take a marker or paint to the edges of all the cut outs so you don’t end up with a bunch of white edges. That really helps sell it. I ran through two gold markers doing so!

I am super happy with the result! Would I rather have an architecturally accurate playset with relief sculptures, working drapes, and lights? Of course! But that is not likely to happen anytime soon. So this will do just fine. Thank you, Darcy!

I already have plans for expansions. I’l like to add the orchestra pit, which will also necessitate building a raised platform for the stage and backstage set. I also want to add a wall off of stage left, to give Statler and Waldorf a place to hang out. And perhaps some audience and seat silhouettes for some interesting camera angles.

I also need to find/create and print some more background drops. In the meantime, it turns out many of the Diorama Prints pieces great!

Oh, and for all you fans that come here for the Bat, the stage is not limited to Muppets. Think of all the great Bat stories that take place on a stage! Hush, Batman ’66, BTAS episodes! Lots of possibilities!

I just had to expand the set by adding the orchestra pit and Statler and Waldorf’s balcony.

The first thing I had to do was build a base to raise the stage and the backstage playset 2 inches, thus allowing space for a “pit” to exist. The entire orchestra pit is made from illustration board and paper. I modified some of Darcy’s art, using cues from  various episodes, to give the orchestra its signature look.

The balcony wall was slightly more challenging. Despite it being fairly off-model, I chose to incorporate Diamond Select’s balcony diorama piece, because doing so cut down on the amount of work. I traced the backside’s shape, then entered those measurements into InDesign. Once again using Darcy’s existing art, I built the wall design around the space the balcony would occupy. Then it was a matter of printing and gluing. The balcony fits snugly inside the whole cut from its measurements. The wall has some removable braces on the backside. When weighted down with a heavy object, they keep the wall upright.

I replaced the flat clamshell footlights with some 3D prints I made.

I also printed and built more stage drops. I think I have 15 in total, of various scenes and scenarios. The images below are just a few of them. Obviously one of them, is now a Muppet Show logo with a door for Kermit.

Now where the heck is this gonna live? 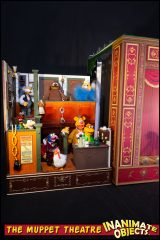 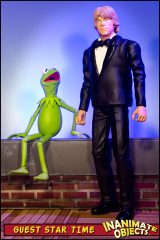 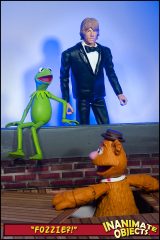 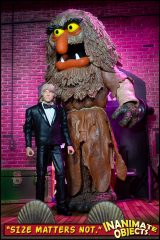 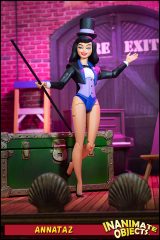 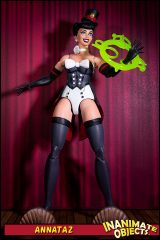 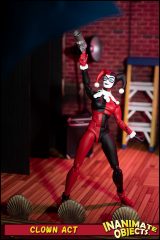 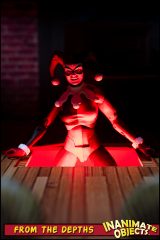 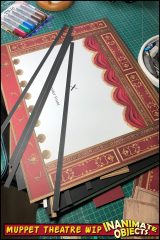 And a short video of the full set up. Please note this was taken before I replaced the footlights with 3D printed versions.