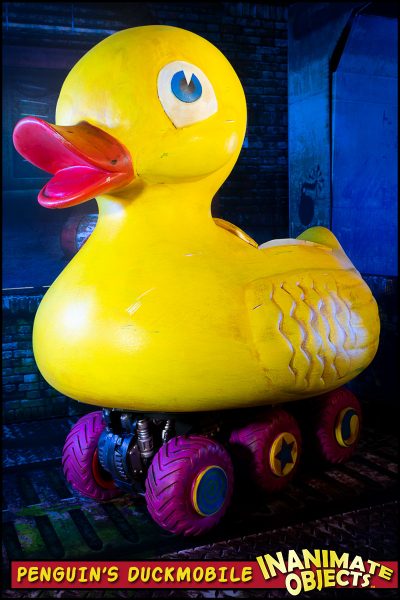 Ideas for customs can appear at weird times and places. A few weeks back I was brushing my teeth, when my brain suddenly asked “Hey, has anybody every made an over-sized rubber duck?” What prompted that inquiry, I cannot say. Nonetheless, 5 seconds on Amazon answered that question with a resounding yes! For $15, I now had a 10.5″ long rubber duck, just begging to be converted into Penguin’s duckmobile! (You can find the duck here.)

Penguin’s on-screen duck in “Batman Returns” is a very specific shape. The duck I acquired was far more generic. The only way to be completely screen accurate would be to sculpt an entire duck from scratch, which I was not about to do. I aimed for “suggestive” rather than full screen accuracy. As such I left the open bill and the lowered wings as is. (I would love to have opening door wings, but again, that would require starting from nothing.)

I covered and “filled in” the existing eyes with Magic Sculpt epoxy. I then used the same epoxy to build up eyes on the sides of the head, and the cheeks. These things alone suggest the screen duck design more than anything else.

To start the cockpit, I drew the opening along the back, and then cut it out with a matte knife. I should mention here that the duck, being vinyl rubber, does not hold a perfect shape. Even heating it with a hair dryer could not yield a symmetrical duck. So I did the best I could with the shape at hand. The duck continues to change shape, depending on room temperature, the weight of any figure inside it, and even the surface it rests on.

The cockpit itself is made from illustration board. I attempted to match the contours of the duck’s body. At one time, the “box” lined up fairly well to the duck. As you can see, by the time the photos were taken, the box sticks out a bit. If I could do it again (I’m not!), I would make the cockpit from thick styrene, and try to wedge and adhere the edges to the inside of the duck, thus forcing the vinyl to hold a more consistent shape. The steering wheel and gear shift are made from bits of fodder. There’s also a seat cut from illustration board that is removable for characters of greater girth. (Looking at you, BTAS Penguin.)

For the wheels and chassis, I found a set of dirt cheap monster trucks at Walmart. A pair of trucks yielded eight wheels with tires the appropriate size, and cost all of $5. I removed the truck bodies, exposing the “shocks” and other “working” parts. I liked this look, and ultimately kept it, choosing not to replicate the circus “box” the screen duck rests on.

Of course, one truck consists of only four wheels, and I needed six. Removing a pair of wheels and the axle from one of the trucks was a chore, but I managed. I then used styrene to build an extension to the chassis, fitting the third pair of wheels to the rear. I found some cheap gaming discs on Amazon that were exactly 1″ in diameter, matching the size of the wheels inside the tires. I glued those discs to the wheels.

The whole wheel structure is then glued to a thick styrene sheet. Attached to the sheet are also six strong, ceramic magnets that pair up with magnets glued inside the duck. Thus the duck with attach to the chassis, but can be easily separated for water scenarios, such as the duck appeared in “Batman: The Animated Series.” (I’m reasonably certain this thing won’t actually float anymore.)

I created the dashboard, the wheel art, and the eyes as vector art. I’ve made the art available for your use in the downloads section.

Painting and weathering the duck was fun. One never knows how various forms of vinyl will react to paint and sprays, so I tested a shot of Dullcote on the discarded “back” of the duck that I cut out earlier. It seemed to dry just fine, so I applied Dullcote to the whole duck body. This gave the acrylic paint that would follow something to adhere to. While the duck itself was yellow, it was semitranslucent. Plus, the sculted additions needed to be painted. So I applied a few coats of yellow to create a consistent, opaque layer. This was followed by a wash of muddy browns. Once dry, I applied more yellow. Not so much as the previous coat, but not so thin as to be dry brushed. Finally, I used a tiny brush to apply various scratches.

Is it screen accurate? No. Is it evocative of the film duck? Absolutely. A unique addition to my “Gotham Garage.” 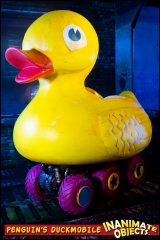 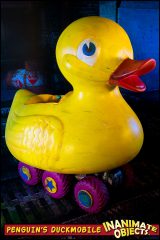 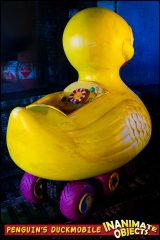 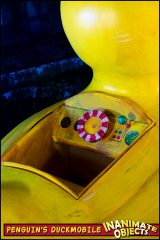 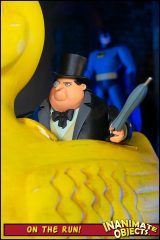 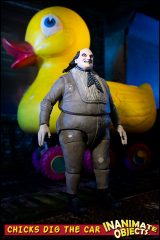 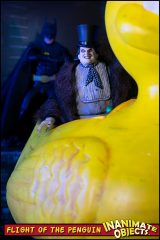 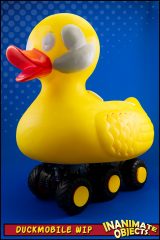