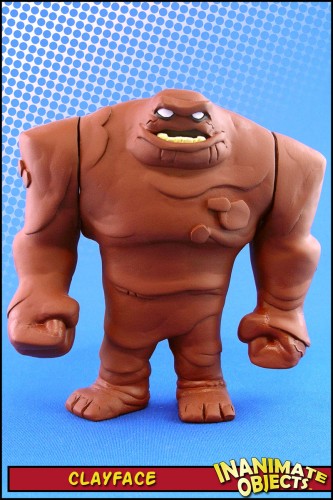 For those of us who make animated-style custom figures, Clayface is far and away one of the toughest to pull off. For one thing, there isn’t much in the way of base figures to work from, and starting from scratch is daunting at best. Furthermore, his design is relatively streamlined and simple, which ironically, makes him that much more difficult to render in 3-D. (The simpler the design, the more the flaws can show up.) I certainly don’t claim to have created the end-all, be-all of Clayface customs, but it’s relatively close to the mark, and I’m happy with it. Given the inherent personal nature of the hobby, that’s all that matters.

Initially, I set out to build a body from scratch over an armature of aluminum foil. I was never satisfied with the proportions, though, so I scrapped that effort. I fell back on the old stand-by method of building over an existing figure, in this case the old Hasbro Clayface. (Even for an old-school Clayface, it was pretty far off the mark.) I started by removing the arms and filling them with Alumilite. This prevented the soft rubber from “caving” as I worked on it. From there the arms and body were covered in various layers of Super Sculpey, Magic Sculpt, Kneadatite and Alumilite. It was a slow, organic process of back and forth. Ultimately, the shoulders were raise from the original, and the overall height increased. The arms were re-attached using styrene rods as pegs. The head itself was a separate sculpt made from Super Sculpey, then retro-fitted onto the body.

As always, I referred to screen grabs and DVDs as much as possible. I found that not only did Clayface go from a warm brown to a mud-color between “Growing Pains” and “Secret Society,” but his design became even more streamlined. I chose to walk the line, picking and choosing the elements between the two versions for my sculpt.

Somewhere during the process, I wanted to see two Clayfaces on my shelf: one in TNBA brown, and one in JL mud-color. Why this sudden urge took hold of me, I can’t say. Of course, given the amount of work the sculpt was requiring, there was no way I was going to do that twice. That meant casting. That meant casting a really big chunk. I’d had some success casting small parts in the past, but nothing this large. Nonetheless, I gave it the old college try. The less said about that experience, the better. Suffice to say I know better what to do next time. In the meantime, I had one Clayface sculpt that my brain was demanding be cloned. The call went out, and Crushinaguy answered.

Have you seen Crushinguy’s customs? The guy is a talent! Easily moving between styles and scales, Crushinaguy brings his formidable skills to the table, expanding his collection with some of the best pieces I’ve seen. He’s also one heck of a nice guy. When I proposed the project to him, he bravely jumped at the chance without hesitation.

When I worked on the sculpt, casting was the furthest thing from my mind. As a result, the final form isn’t as conducive to casting as it would have been had I planned such from the beginning. That didn’t stop Crushinaguy. He barreled on through and managed to make some fine looking duplicates. The arms aren’t really articulated anymore, but I always expected the final result would be more a figurine and less an action figure.

I can not thank Crushinaguy enough for his help making this project a reality. He really pulled the fat out of the fire, and I hope we get a chance to work together again soon.

I’d also like to send a shout out to my pal Mike Danza. Back when we worked on our Toyman custom together, we had talked of making a Clayface. Since then, Mike’s gotten kind of busy. I hear expanding one’s family will do that. (Ha!) Never the less, our discussions of the project led to this, and I feel he’s due some well deserved credit.Clayface is now finished, and I’m very pleased with the final result of the original and Crushinaguy’s castings. A big hole on my shelf is now filled. 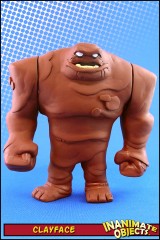 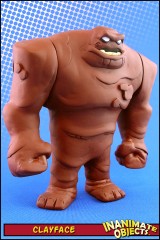 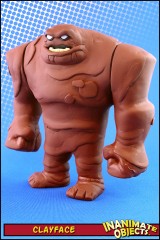 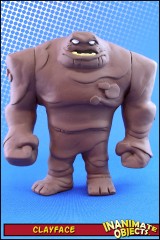 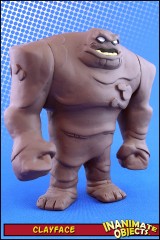 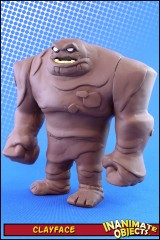 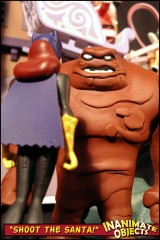 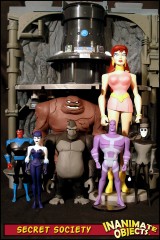