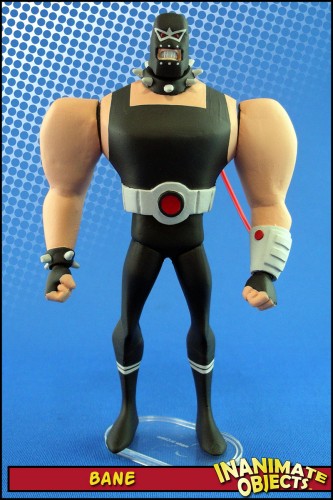 The historical timeline of customizing is parallel to the growth of the internet. Many years ago, as customizers were setting up their first galleries and websites, I produced my first version of Bane. Looking at the custom now, it’s pretty rough. I like to think I’ve improved since then. But at the time, that Bane got a lot people interested in the recipe, and it’s been used many times since. It’s now several years later, and it’s time to upgrade.

(Ironically, the very week I painted this, Mattel announced their upcoming plans for new JLU figures, including the first ever “new school” Bane. Sadly, they are limited by their standard body types. I think their Bane looks fine with a standard body, despite some painted details, but he’ll be far too short by anyone’s measure. Thus mine still retains legitimacy on my shelf.)

This project was a long time in the making, and I don’t think I can remember all the details. The biggest issue was creating a body and arms that were bigger than all the other standard bodies (Hasbro and Mattel), but still maintain the proper style and proportions of the character. I zeroed in on the legs first. Bane’s legs are that of a Superman from Jollibee, a fast food restaurant in the Philippines. They offered some JL kids’ meal premiums a few years ago, and the figures were larger than the standard Mattel bodies.

Now I needed a torso to match the legs. I went through many permutations and experiments, most of which are best left forgotten. Ultimately, I found the best solution was right under my nose. (Or in one of many parts boxes, at least.) The chest came from the sculpted top of a Batman motorized lollipop holder. No, I am not making this up. I found one of these years ago, thought it might be useful one day, and it’s been sitting in a box ever since. Turns out, it’s a near perfect match for the legs.

The arms were toughest, and ultimately I feel they could be improved upon. Again, I tried many options, and nothing worked properly. I ended up using the arms from a Hasbro Happy figure, just like my previous Bane, but this time I spliced the arms, extended them, and bulked them up quite a bit using Magic Sculpt.

I knew I could use the same Speed Racer villain’s teeth as I had on the last Bane, but the head itself needed to be bigger. Again, saving everything worked in my favor. I found in the “heads” drawer an animated-style Captain America, from the short lived animated Avengers line. I had intended to use it for a character with a large chin someday, but the size was what I needed for Bane. So, Cap made the ultimate sacrifice and gave up his noggin. Magic Sculpt was used to create the mask around the teeth, and fill in various etched details.

Once again, the venom tube is made from model railroad wire, and the spikes are taken from an old Chun Li figure. The collar was shaped from Super Sculpey as a separate piece.

Aside from some minor issues, I am very pleased with this new Bane. He required a lot of work and patience, but it was worth it to have a massive Bane now towering over Batman.

Thanks to Peter Go and Crushinaguy, without whom this project would not have been possible.

2014 Update: I recently prepared a packaged version of Bane. New photos below! 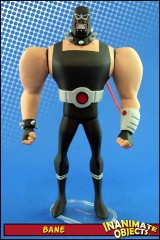 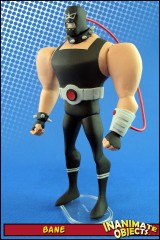 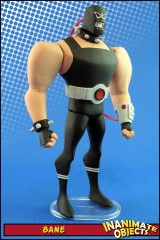 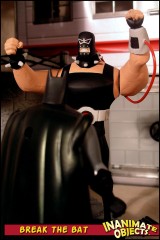 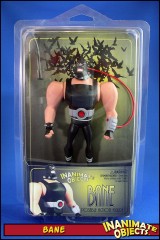 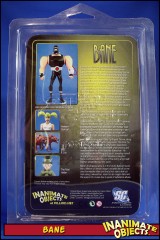