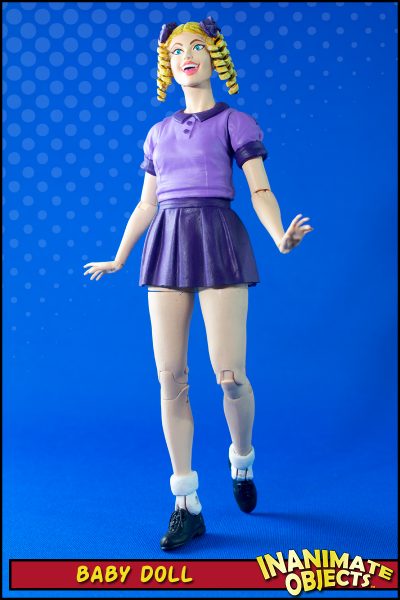 Right about now, you might be thinking ‘What the hell, Casimir? Baby Doll as a Bombshell? That is not okay. You should seek counseling.” I get that. I really do. But hear me out. It’s not what you think.

While I was pondering my “comic book style” Baby Doll, I wondered if there was a way to bring her into the Bombshell world. If anything, she belongs there almost more than BTAS, given her young Shirley Temple curls. But even then, I felt a “baby” Mary Dahl running around with Bombshells would be… icky. Then I started to ponder, “What would Baby Doll look like if she didn’t suffer from systemic hypoplasia, and grew to be an adult. Is there a way to incorporate her “gimmick” while still being an adult?” Then the frustrated writer in me kicked into overdrive. I crafted some fan-fic that would meet all of the requirements. Now I could get to work on the customs. (The full story is posted below.)

The base figure is Diamond Select’s Gotham Barbara Kean figure (the prison dress). I sliced off the majority of the dress well above the knees. I added the collar and rolled-up socks using Magic Sculpt. The buttons are sliced from a styrene rod.

Her head is a casting of Bombshell Wonder Woman. Her non-curly hair is magic Sculpt, and the bows come from a Marvel Legends White Rabbit. I used ProCreate to shape the curls, as they needed to be flexible once cured. I flattened out the ProCreate like I was making cookies, sliced off thin strips, and then wrapped those around a very thin piece of styrene rod. Once cured, the curls popped right off. A little trimming, and then I affixed them with super glue to the noggin. 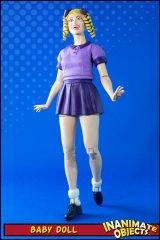 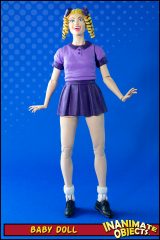 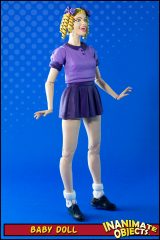 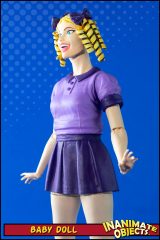 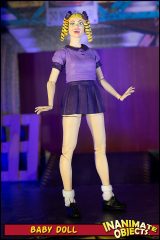 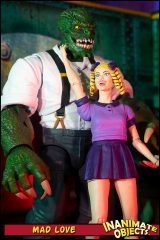 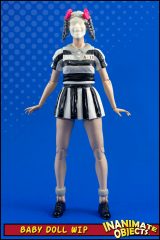 The Tragedy of Baby Doll

Mary Dahl (b. 1912) was the daughter of hardworking, middle-class parents in a small, rural community in Northern California. She was a precocious and talented child. Her parents recognized her gifts, and took a chance. They closed up their small general store and moved to Los Angeles, to pursue a career for Mary in the burgeoning field of silent movies.

Mary was a hit! Her series of “Baby Doll” pictures took the nation by storm. Her ticket sales often outsold major stars of the time like Buster Keaton and Charlie Chaplin. Every little girl in the country wanted a “Baby Doll” doll. Her parents were lifted from a hard-scrabble life. The Dahl’s were flying high.

Then, on October 6, 1927, “The Jazz Singer” was released, and nothing would ever be the same again.

“Talkies” sent silent films to the dustbin of history. Mary, now 15 and no longer looking like a “baby,” was ready to take the leap. Sadly, Mary’s voice was made for silent films. No one would cast her in a sound film, not even in a non-speaking background role. The Dahl’s star quickly fell.

But the worst was yet to come.

During one of her many auditions for a speaking role, Mary was a victim of sexual violence at the hands of a trusted family friend, who happened to be a successful Hollywood director with a great deal of clout. Mary and her parents immediately spoke out against the director, but he called in favors and twisted the tale in the press such that Mary became the villain of the story. Mary’s star had not just fallen, it had been buried.

And yet, the misogynistic director was not satisfied with the destruction of Mary’s career. Shortly after Mary’s name was tarnished in the press, she and her parents were involved in a horrific car accident. Mary barely survived, but her parents did not. Among the Hollywood elite, it was whispered that the director had arranged the accident, but nothing could ever be proven.

Sadly, fate was not yet done with Miss Dahl. In happier times, her parents had prepared a will, granting custody of Mary and her career to her godfather and family friend. The Godfather happened to be the director who destroyed her life. The will had not been altered before their untimely deaths. And so, failing to kill Mary, the director arranged to have her sent far away, such that she could no longer be a threat. He had are interred back East, inside the walls of Arkham Asylum, on her 17th birthday.

As if the loss of her career, her innocence, and her family were not enough, the horrors of Arkham crushed her spirit and damaged her mind. She mentally withdrew to a happier place and time, when life was full of delights and every day was a happy adventure. Mary Dahl had become Baby Doll.

In 1935 she escaped Arkham. Mary returned to Hollywood, seeking to destroy the director. Disguising herself as a voluptuous ingenue, she lured the director to a private hotel room. The authorities found him the next day, in several rooms.

But the mentally fragile Baby Doll was not satisfied. Vengeance did not provide the balm on her soul she yearned for. So she continued to hunt down and prey upon the sexist chauvinists in Hollywood, of which there were many. In time, this led to clashes with the rising masked heroes of the Golden Age. Baby Doll added them to her list of targets as well, clashing against the capes and cowls again and again.

Though imprisoned many times, Baby Doll is once again loose on the streets of Hollywood, leaving a bloody trail of vengeance that belies her childish appearance.