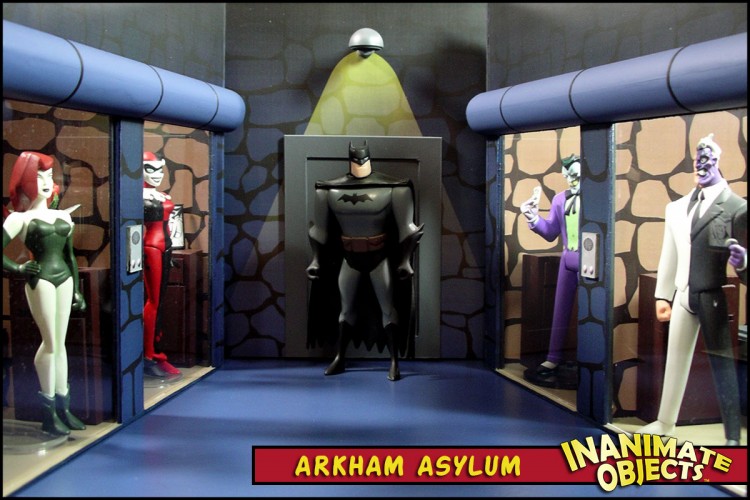 Arkham Asylum. The very name strikes fear in the hearts of the just and unjust alike. And probably a few customizers, too. I’ve rarely seen efforts to bring Arkham to one’s shelves beyond some simple cardboard divisions, much less anything that attempted to be screen accurate. It was time to set a precedent.

Frankly, I blame most of this on Tyke. The two of us were admiring the recent Scooby-Doo haunted house playset, and pondering its customizing possibilities. I suggested that with a little effort and imagination, it might make a decent (generic) Arkham Asylum. (I still think that’s a good idea, should anyone want to pursue it.) Tyke really encouraged me to follow through with the concept, and I gave it careful consideration for a few days. But the more I thought about it, the more I wanted something that was closer to screen accurate. This was shortly after I finished the Fortress Zoo playset, so some of those concepts were still fresh in mind. I was struck by how a similar approach could work for an Arkham playset. This meant starting from scratch, though, and abandoning the haunted house base.

As with all playsets meant to represent a large physical space, the first task is to decide how to scale it down. Arkham is usually shown as long hallways, which wouldn’t make for a very appealing display. So as with the Fortress Zoo, I created to sections that can be angled to any degree. For display, the cells can be angled out. For photographs, I can position them parallel. (See below.) The flexibility allows for many options.

The basic construction material is illustration board. The “glass” panels are carefully cut from a cheap piece of plexi-glass (from a cheap frame). The stonework walls were created in Illustrator and printed. The pipe is two pieces of quarter-round dowel glued together. The back door is illustration board, and the light fixture above it is from junk in the leftover parts box.

I studied all of the Asylum’s TNBA appearances. I’d like to note that sometimes the main floor is shown to be made of stone, like the walls, but in a square grid pattern. I decided that since the cells would most often be displayed at an angle, a grid pattern might be distracting. So the floor is simply painted a matching blue. Also, I originally planned to include six cells instead of four, but the size requirements got out of hand.

As always, you can download the walls and instructions below to make your own Arkham Asylum playset!

You can download the necessary art amd notes to build your own Arkham Asylum. The parts are hardly 100% accurate, so expect some give and take in the building process. Jump to the downloads section to build your own playset! 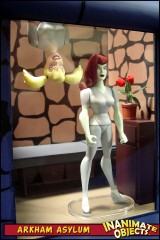