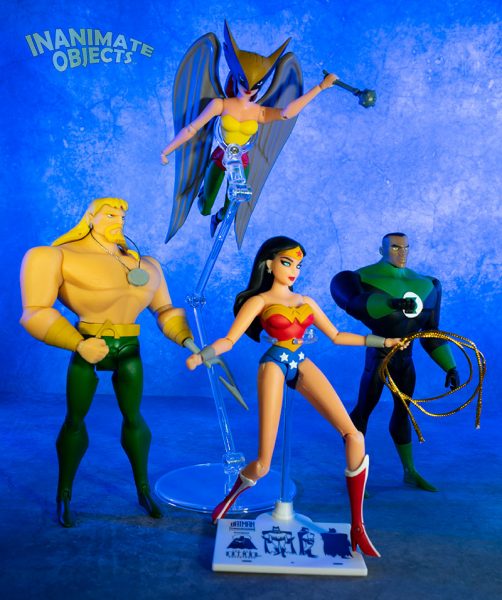 The DC Collectibles Animated Justice league figures via the DC Universe app are starting to show up. Given the unusual nature in which the figures are being released, many potential customers are on the fence as to whether these are worth the extra cost and hurdles associated with purchasing them. I am here to help answer that question.

In the last couple of weeks, those of us who live and breath the Timmverse have seen a handful of reviews concerning these figures pop up. The majority of these reviews were made possible by DC/WB sending out free review copies to media influencers. Which is fine. I wish somebody would send me free stuff. But the nature of such relationships mean you don’t always hear so much about the negatives, only the positives. I bought these with my own funds, so I can speak truth to power.

(Twice in my life I received free goods to review. My reviews were very honest. I never received anything to review from either company again.)

If you are a big Timmverse collector like me, you are already in the bag for these. Nothing I say will change your mind, and I don’t intend to it. I bought these for myself for that very reason. But if you’re subscribing to the DC Universe app for the sole reason of buying these (and not for the shows or comics), I cannot in good conscience recommend doing so. I regret to report that these figures are sub-par, especially given the price and what I know DC Collectibles is capable of delivering.

Let’s look at each character individually. 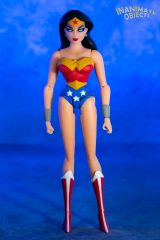 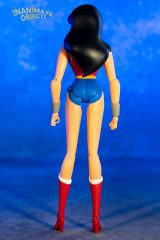 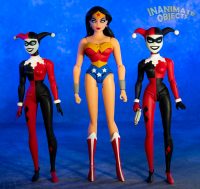 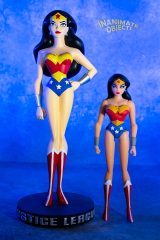 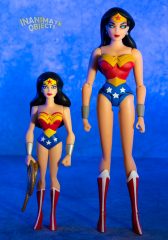 Diana’s sculpt is generally solid. The articulation is acceptable. Her biggest flaw, as most people have noted, is her upper legs are far too long, even by Timm standards. The hair could do with a little more mass, too. Her face appears a little odd as the eyeliner is too thick, and the eyes themselves too pale. And like most of her teammates, she suffers from a lack of waist articulation of any kind. And her left hand is some kind of deformed hook grip. (And both hands are too small.)

Short of plastic surgery, there’s no way to fix those long legs. But the whole effect is made worse because her neck is too short. I did a quick Photoshop test to see if a lengthened neck would help. Have a look: 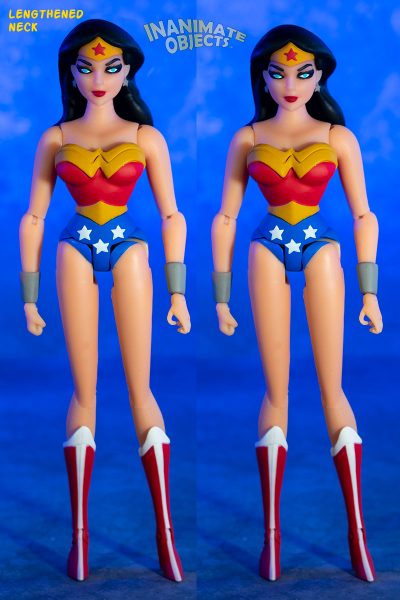 I think a neck extension really helps mitigate the weirdness of the legs. I will be applying that correction to my figure soon.

I should note that my copy has an odd gap between her left leg and pelvis, resulting in an odd standing position. I assume other copies don’t have this problem. 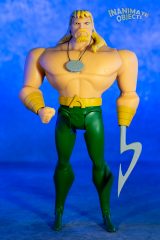 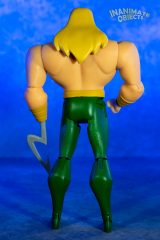 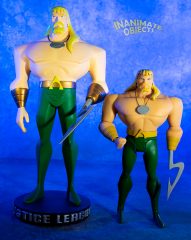 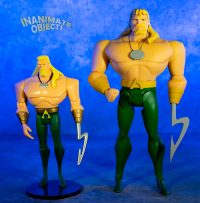 The Aquaman figure is…. acceptable. But he should be better. His chest is supposed to be broad, but something about this seems off. It might be all the rounded angles in the shoulders, when those should come to a sharp edge. Of the four figures, his one good hand is the only one that’s close to being properly sized.

Aquaman is the only figure of this bunch to feature a waist swivel. I wish the others had it. Oddly enough, he does not have any kind of swivel in his legs, as the others do. And on my copy, the legs align in an odd fashion such that when the waist is centered, the feet are not. Perhaps they warped in the box. I can’t say. 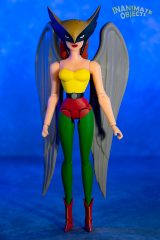 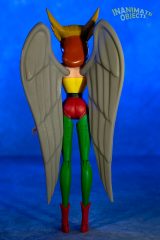 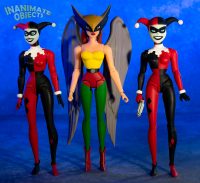 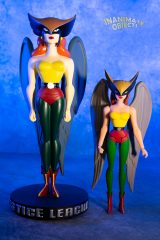 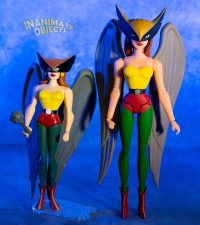 Hawkgirl is not bad. Of the four, she may have the fewest flaws. Of those, her hands and feet are far too small, even by Timm standards. (And she has that weird claw grip.) She could really use some waist articulation. And I think DC Collectibles missed a real opportunity by not putting more effort into the wings. These are not better than the Mattel versions. Would some wing articulation kill ya, DCC?

As pointed out by others, the lack of her mace is disappointing. I gave her the Mattel Hawkgirl mace in the photo at the top. The good news is it scales well enough to pass. The bad news is the wrist joint in my copy is so weak, she can’t hold it up. It constantly flops upside down. Which is why it looks weird in that photo. As a customizer, I can fix that. But I shouldn’t have to. 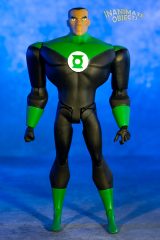 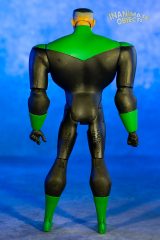 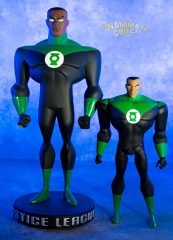 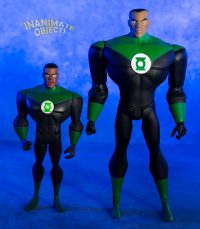 Poor John. He is easily the absolute worst of this group. I don’t know what happened, but this figure looks like a warped zombie version of Green Lantern John Stewart. His chest is far too large. His shoulders are bulbous and round. His hands are too small and clawed. One leg is longer than the other. And most grievous of all, his head has been shrunk, which makes the whole package look that much worse. It’s as if he was sculpted at a larger scale, then each piece reduced individually, but not at matching rates. I wish I had something positive to say about this figure, but it’s just straight up wrong and ugly.

Mattel’s original “Big 7” were not sculpted by Mattel. The original sculpts were done by DC Direct (later Collectibles), at a time when they were exploring the option of releasing an animated line themselves (circa 2003.) When Mattel stepped in, they used the DC Direct sculpts. Those figures are generally considered to be reasonably accurate, given their size. Clearly, something in the last 15 years has gone horribly wrong.

So, if you haven’t already subscribed to the DC Universe app, and you only want to do so in order to buy this figures, should you? If you’re a die-hard Timm fan, of course you are. If not, save your money. If you’re already subscribing for the shows and comics, should you buy the figures? Again, hard core Timm fans will, no matter what. (I did.) But if you are not hard core, I suggest you pass. Given what I know DC Collectibles is capable of delivering at this price point (i.e. Bombshells wave 1), these figures are a big step down. The sculpts are weak, the articulation is not up to the standards of previous animated offerings, and no accessories of any kind makes these a tough sell. Given that these are meant to draw in new subscribers, these should have been top notch. Instead, these appear to be an after thought.